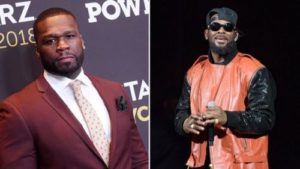 50 Cent is definitely one of the most vocal men in the US music industry. The rapper-turned-entrepreneur is probably the biggest troll/bully on the internet, consistently going after his usual targets.

It’s common to see him hating on Floyd Mayweather, Ja Rule, his baby mama; Shaniqua Tompkins, and more. Yesterday, he decided to dive into a seriously hot topic by speaking on R.Kelly, who has been all over the news for some days now.

It feels like every second story that goes up anywhere is about R. Kelly… that’s how much news there is to make about this situation. Now, 50 Cent has chimed in by sharing some footage of the disgraced singer’s party from last night.

R. Kelly showed out in Chicago last night to celebrate his birthday, surprisingly leaving the house after all the negative press he’s gotten. As you would probably expect, he didn’t give a crap about any of the headlines, flexing his vocals on the microphone and attracting even more hate because of it.

Most celebrities have been apologizing for their various past ties with R.Kelly but 50 Cent is busy just reflecting on the severity of it all. He posted a video of the artiste singing from last night, adding, “at the club ?and got b*tches some where shitting in buckets.”

While he was out “at the club,” police came looking for the man with what turned out to be a false warrant for his arrest.

?at the club ?and got bitches some where shitting in buckets. ?????