#ViralNow: Man kills his girlfriend for opening his bottle whiskey 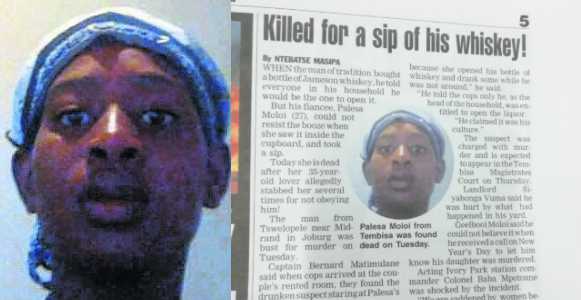 A very traditional man has been charged with murder after he killed his 27-year-old girlfriend for opening his bottle of Jameson whiskey to take a sip.

The 35-year-old suspect, from Tswelopele near Midrand in Johannesburg, South Africa, told everyone in his household he would be the one to open the bottle of Jameson whiskey in the house.

But his fiancee, Palesa Moloi, 27, saw the whiskey inside the cupboard and opened it to take a sip. When her lover found out, he stabbed her several times for not obeying him.

When police interrogated him, he told them he killed the woman because she opened his bottle of whiskey and drank some while he was not around.

He told the cops only he, as the head of the household, was entitled to open the liquor. He claimed it was his culture.

The suspect was charged with murder and is expected to appear in the Tembisa Magistrates Court on Thursday.

Father of the deceased, Geelbooi Moloi said he could not believe it when he received a call on New Year’s Day to let him know his daughter was murdered.

We are saddened by women being killed by the people who are supposed to love and protect them.