The orange seller clearly had a sheet tagged to his cart, which reads ‘POS is available’. Here are photos orange seller who offers POS option below; 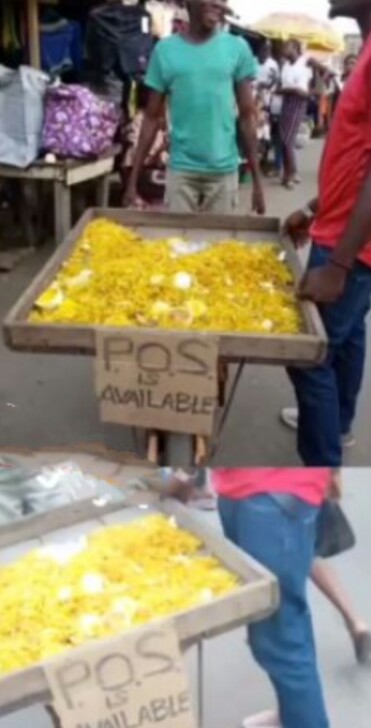 This is coming after Local media in China, shared news of mobile-savvy beggars in the city of Jinan, in China’s Shandong province. They gather in areas popular with tourists, holding begging bowls that contain a QR code printout. Anyone with Alipay, WeChat Wallet, or some other mobile payment app can scan the code and make a donation.

One of the beggars who caught the media’s attention was reportedly a man with mental Challenges and the QR code he had was made by his family to help him. However, it also appeared that QR code begging serves other purposes besides generating income for people down on their luck. According to digital marketing company China Channel, many beggars in Beijing receive payment from local businesses for every QR code scanned by passers-by. The enterprises use these scans to collect people’s data from WeChat profiles, then sell the IDs for quite a pretty penny to small businesses. The latter use the information to bombard the users with unsolicited in-app advertisements.