#ViralNow: Young man drowns in Port Harcourt beach while his friend filmed on

A young man has lost his life after he reportedly drowned in a Port Harcourt beach, while his friend filmed with the thought that he was having fun.

According to Twitter user @Aunty_Les, his cousin was the victim and the incident occurred in Abuloma, Port Harcourt. 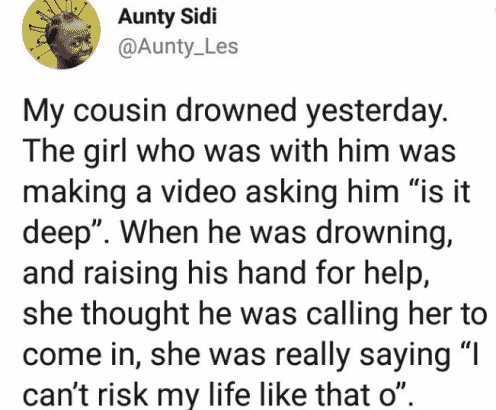 Read her tweets below;

My cousin drowned yesterday. The girl who was with him was making a video asking him “is it deep”. When he was drowning, and raising his hand for help, she thought he was calling her to come in, she was really saying “I can’t risk my life like that o”.

She was almost arrested cos they thought she knew he was drowning but made the video instead of screaming for help. From the video, he was standing at the shallow end of the beach but the ground under him opened up because they’ve been dredging that area.

Such a sad sad way to die. He was in the water for barely 10 seconds. If not for that video, the girl would have been arrested cos people who saw them together said it didn’t take 5 mins from when they saw them to when he died.